Operation Chariot: The Raid on St. Nazaire
By Jon Cooksey 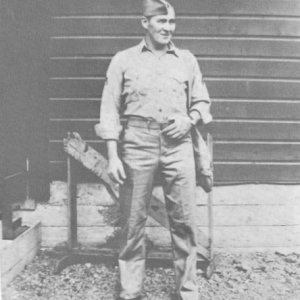 Silver Star : The President of the United States of America takes pleasure in presenting the Silver Star to Corporal John J. Leary (MCSN: 338165), United States Marine Corps Reserve, for conspicuous gallantry and intrepidity in action while serving with the Second Marine Raider Battalion during operations against enemy Japanese forces on Guadalcanal, Solomon Islands, on 3 December 1942. When the leader of his platoon was gravely wounded during a fierce engagement with a large Japanese combat patrol, Corporal Leary with utter disregard for his own personal safety and in the face of severe enemy machine-gun fire, hurried to his injured comrade and removed him from danger. Corporal Leary's great personal valor was in keeping with the highest traditions of the United States Naval Service.

Silver Star (Gold Star) : The President of the United States of America takes pleasure in presenting a Gold Star in lieu of a Second Award of the Silver Star to Platoon Sergeant John J. Leary (MCSN: 338165), United States Marine Corps Reserve, for conspicuous gallantry and intrepidity while serving with Company B, First Battalion, Twenty-seventh Marines, FIFTH Marine Division, during action against enemy Japanese forces on Iwo Jima, Volcano Islands, on 4 and 5 March 1945. Acting on his own initiative when his Company Commander was wounded, Platoon Sergeant Leary took under his supervision and control the plan of night defense, accomplishing the mission under a heavy enemy mortar and artillery barrage. On the following morning, he effected the relief of his company by another unit, personally moving through intense hostile machine-gun and mortar fire to reconnoiter routes of approach for the relief troops and, in one instance, leading a platoon away from its front line position. By his courage and tactical skill, Platoon Sergeant Leary sided materially in completing a hazardous maneuver and his devotion to duty throughout was in keeping with the highest traditions of the United States Naval Service.