Going to the Wars
By John Verney 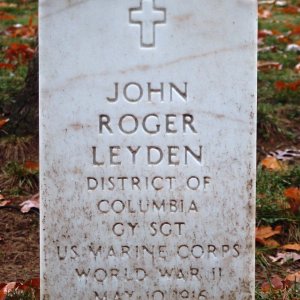 Silver Star : The President of the United States of America takes pride in presenting the Silver Star (Posthumously) to Gunnery Sergeant John R. Leyden (MCSN: 249877), United States Marine Corps, for conspicuous gallantry and intrepidity while serving with the Third Marine Raider Battalion during action against enemy Japanese forces in the Solomon Islands Area on 1 November 1943. During the landing attack of the THIRD Marine Division, Reinforced, at Puruate Island, Gunnery Sergeant Leyden was in charge of a five-man combat team detailed from his platoon to clear the trees of hostile snipers. After the platoon had passed through an area under severe mortar barrage, he remained behind with his combat team, courageously directing his men in attacking and killing snipers stationed in that zone. Although he successfully accomplished his mission in the face of a terrific shelling by Japanese mortars and automatic rifles, he was mortally wounded by enemy fire. His courageous action in clearing the area of snipers was a major factor in the securing of our beachhead and reflected great credit upon himself and the United States Naval Service. He gallantly gave his life for his country.