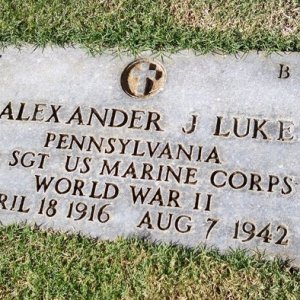 ​
Alexander Joseph Luke, born on 18 April 1916 at Philadelphia, PA., enlisted there in the Marine Corps on 21 June 1934 and underwent boot camp training at the Marine Corps Recruit Depot, Parris Island, S.C.​
​
After duty at the Marine Barracks at the Norfolk Navy Yard, Portsmouth, Va., and at the Naval Torpedo Station, Newport, R.I., Private Luke served in the 4th Marines, at Shanghai, China, between 20 April 1936 and 20 April 1938. During that time, the regiment guarded American interests and ensured the territorial integrity of the neutral International Settlement during the Sino-Japanese hostilities that threatened the city of Shanghai between August and November 1937.​
​
Subsequent tours of shore duty followed in the United States, first at the Marine Barracks in the Philadelphia Navy Yard and then at the Norfolk Navy Yard. During that time, he was promoted to corporal on 2 November 1939 and to sergeant on 22 May 1941.​
​
Ultimately, with the rank of platoon sergeant, Luke was assigned to Company "E", 1st Raider Battalion, 1st Marine Division, Fleet Marine Force, and sailed for the South Pacific in the spring of 1942 to prepare for the initial American amphibious assault of the war in the Pacific in the British Solomon Islands​
​
At 0830 on 7 August 1942, Company "E" landed at Tulagi in the second assault wave and, in concert with Company "F", 1st Raider Battalion, moved inland to clean out Japanese snipers infesting the western end of the island. That night, as Major General Alexander A. Vandegrift, USMC, the 1st Marine Division commander, later reported, "the Marines had their first taste of the Jap at his best in a savage all-night fight."​
​
The Japanese counterattacked and initially succeeded in driving a wedge between two Raider companies. During the gallant holding action, Platoon Sergeant Luke saw one of his machine gunners crumple, dead, behind his weapon. Despite heavy enemy fire, Luke rushed to the gun to put it back in action. His grim determination was typical of the spirit of the Marines who succeeded in repulsing the tenacious enemy attack. Ultimately succumbing to the severe gunshot wounds he suffered on the night of 7 August, Luke, awarded posthumously a share of the 1st Marine Division's Presidential Unit Citation and the Silver Star, was buried on Tulagi.​

Silver Star : The President of the United States of America takes pride in presenting the Silver Star (Posthumously) to Platoon Sergeant Alexander J. Luke (MCSN: 243381), United States Marine Corps, for conspicuous gallantry and intrepidity while serving with the First Marine Raider Battalion during the attack against enemy Japanese forces on Tulagi, Solomon Islands, on the night of 7 - 8 August 1942. When a hostile counterattack was directed against his company's position, Platoon Sergeant Luke, after realizing that one of his machine gunners had been killed, immediately rushed to the gun and put it back in action, although he, himself, was under heavy enemy fire and mortally wounded. His grim determination and great personal valor assisted materially in the eventual repulse of the enemy and upheld the highest traditions of the United States Naval Service. He gallantly gave his life in the defense of his country.