A Hell for Heroes: A SAS Hero's Journey to the Heart of Darkness
By Theodore Knell

Staff member
Morris ​
Bernard James Briant ​
Beach Commando (R.A.N.V.R.) ​
Lieutenant Commander ​
​
Bronze Star (US) ​
Balikpapan 1945 ​
born 21.10.1905 Dover,Tasmania​
next of kin Susie Morris​
enlisted 18.8.1941 Hobart,Tasmania​
discharged 18.12.1945 (Lt,HMAS Huon)​
​
Bernard James Briant Morris V.R.D.​
​
Number: -​
Rank: Lieutenant Commander​
D.O.B.: 21st October 1905, Dover, Tasmania​
​
​
Service History​
​
03.12.29 ? 02.12.35 Served as a Sergeant in the Militia Artillery​
​
18.08.41 Enlisted as a Sub Lieutenant, HMAS Derwent​
30.08.41 Posted to HMAS Cerberus​
29.09.41 Passge to United Kingdom per ?Columbia Star?​
04.10.41 London Depot​
03.12.41 Posted to HMS King Alfred and promoted to Lieutenant​
10.02.42 Posted to HMS Quebec ? Combined Training Centre for Tank​
Landing Craft​
01.04.42 Posted to HMS Dinosaur​
06.02.43 Awarded restricted Watch Keepers Certificate for Landing Craft​
Tanks only​
01.05.43 Posted to HMS Hamicar​
16.07.43 HMS Hamicar, Tunisia​
01.03.44 Returned to Australia and posted to HMAS Huon​
30.04.44 Posted to HMAS Lonsdale​
21.05.44 Posted to HMAS Assault​
26.07.44 Posted to HMAS Huon​
14.08.44 Posted to Kuranda as Deputy Principal Beachmaster, Naval Beach​
Commando ?B?​
Nov. 1944 Appointed Principal Beachmaster, Naval Beach Commando ?B?​
11.02.45 Posted to HMAS Magnetic as Principal Beachmaster, Naval Beach​
Commando ?B? and promoted to Acting Lieutenant Commander​
16.04.45 Posted to HMAS Madang ? Naval Beach Commando, Borneo​
May 1945 Tarakan Landings​
31.05.45 Attended conference H.Q. 7th Australian Division, Morotai​
June 1945 Extract taken from 1 Australian Combined Ops Section Diary.​
LCDR B.J.B. Morris RANVR carried out duties of Principal Beach​
Master and Port Director until relieved by a Port Director USN on​
P/16 (May 17th, 1945). It has been fully recognised by all​
concerned, that this officer, assisted by his Beach Parties and​
Signals, handled a most difficult task in a very able manner.​
01.07.45 Landed Green Beach, Balikpapan Landings at 0935 from control​
craft.​
July 1945 Was recommended to be made an Officer of the Order of the​
British Empire for his work during the Borneo Landings.​
?For devotion to duty, endurance, cool judgement and leadership​
which enabled all shipping to be safely beached under most​
difficult conditions at Tarakan May 1945.​
Lieutenant Commander Morris, Principal Beachmaster for the​
Tarakan operation took over his command shortly before leaving​
the mainland. His enthusiasm raised the standard of the unit and his​
signal section so that throughout the operation he had full control​
of the beaches and signal communication to seaward never failed​
24 hours a day and was invaluable. His planning of the work of his​
unit with US Navy ensured a smooth operation and a letter from​
Captain Sinclair, Commander L.S.T. Task Unit dated 6 may 1945​
states ?It is my pleasure to bring to your attention the highly​
satisfactory manner in which LCDR Morris has carried out his​
duties as Principal Beachmaster during the assault phase of OBE​
ONE. Without his cheerful persevering efforts and excellent​
cooperation it would have been impossible to complete the​
unloading of the assault echelon of the LST?s.?​
This recommendation seems to have gotten lost in the paperwork​
trail, and Morris was not decorated for this action.​
11.10.45 Appointed to duty with Naval Officer in Charge, Moluccas​
01.12.45 Returned to Australia and posted to HMAS Huon​
18.12.45 Demobilised​
19.12.45 Appointed Lieutenant, RANVR​
14.03.46 Granted War Service Rank of Lieutenant Commander​
19.01.50 Commonwealth of Australia Gazette ? award of United States​
Bronze Star.​
?For distinguishing himself by meritorious achievement as the​
principal Beachmaster and the Commanding Officer of the Royal​
Australian Naval Beach Commandos during the operation for the​
recapture of Balikpapan, Borneo from 1 to 3 July, 1945. His task​
included the orderly landing and unloading of large quantities of​
troops, equipment and stores on the Klandasan Beaches near​
Balikpapan. His initiative, keen judgement and intrepidity made a​
distinct contribution to the success of the landing operation.?​
30.06.50 Promoted to Lieutenant Commander, RANVR​
03.08.51 Appointed Lieutenant Commander RANR​
19.08.51 Posted to HMAS Cerberus for Gunnery Course​
28.09.51 Posted to HMAS Huon​
01.12.52 Posted to Cowra for training​
26.08.54 Posted to HMAS Lonsdale for DEMS Course​
09.08.56 Posted to HMAS Cerberus as Senior Officer DEMS Gunnery​
Course​
28.10.57 Appointed Lieutenant Commander RANVR​
31.10.57 Posted to HMAS Huon in command for training​
07.08.58 Posted to HMAS Cerberus for Advanced Gunnery Course​
02.09.61 Posted to HMAS Huon​
30.08.62 Officer in Charge of Sea Cadet Camp​
21.10.63 Transferred to the Retired List​
​
​
Notes:​
Date unknown but was awarded RAN Volunteer Reserve Decoration (V.R.D.).​
The award of the U.S. Bronze Star to LCDR Morris was the only award to a serving member of the Royal Australian Naval Commando.​ 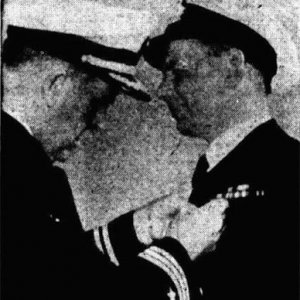