The Grey Goose of Arnhem: The Story of the Most Amazing Mass Escape of World War II
By Leo Heaps 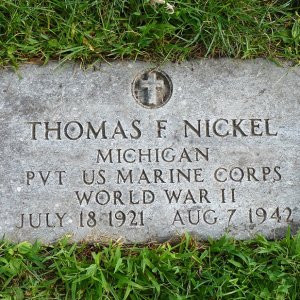 Silver Star : The President of the United States of America takes pride in presenting the Silver Star (Posthumously) to Private Thomas F. Nickel (MCSN: 367233), United States Marine Corps Reserve, for conspicuous gallantry and intrepidity in action while serving with Company B, First Marine Raider Battalion during an attack against enemy Japanese forces on Tulagi, Solomon Islands, on august 7, 1942. In the face of hostile machine-gun fire, Private Nickel, with utter disregard for his own safety, worked his way forward until he was close enough to the enemy position to engage it with hand grenades. Although he, himself, was mortally wounded, his squad was able to advance without further casualties. His tenacious devotion to duty and great personal valor were in keeping with the highest traditions of the United States Naval Service. He gallantly gave his life in the defense for his country.