Staff member
O'Leary ​
William Joseph (Bill) ​
PPA S Patrol ​
Sergeant ​
962728 ​
Military Medal ​
Italy 1944 ​
parent unit Royal Artillery​
born 19.2.1922​
resided 38 Old Church Road,Romford,Essex​
enlisted 15.2.1940 Davenport​
joined PPA 1.12.1943​
"A very popular character,on all of the "Cloak and Daggers" with S Patrol"​
(Popski)​
died 16.12.2010​
​
Daily Telegraph Wednesday 16th March 2011​
Obituaries​
Sergeant Bill O'Leary​
Sergeant Bill O'Leary, who has died aged 93, was the epitome of the tough Special Forces NCO, and served with Popski's Private Army in Italy, where he was awarded a Military Medal.​
6:25PM GMT 15 Mar 2011​
​
On November 13 1944 an order was given to attack and capture a German outpost in a farmhouse near Ravenna which was holding up the Allied advance. The operation had to take place without weapons being fired, to conceal from the enemy the fact that they had lost an important strongpoint.​
​
The task was given to No 1 Demolition Squadron, the irregular unit commanded by Major Vladimir 'Popski' Peniakoff and better known as "Popski's Private Army" (PPA). At first light the PPA party rushed into the farm and captured four surprised Germans who were on the bottom floor.​
​
O'Leary ran upstairs and, meeting an enemy soldier with an automatic weapon, charged him and knocked it from his grasp. He then ran into a room in which there were four more Germans. Three were in bed, but the other reached for his gun.​
​
O'Leary overcame him and called on the remainder to surrender, which they did. The citation for his MM paid tribute to his courage and coolness in not firing his Thompson submachine gun despite the fact that he was outnumbered.​
​
William Joseph O'Leary was born in Bermondsey on September 19 1917. After the family moved to Romford, Essex, he went to St Edward's Roman Catholic School and then became an apprentice tiler in mosaics. In 1940 he enlisted in the Royal Artillery and joined 1st Battalion the Parachute Regiment the following year. O?Leary took part in Operation Torch, the First Army landings in North Africa, and was wounded twice in Tunisia and again in Sicily. In 1943 he transferred to the Eighth Army by joining the PPA.​
​
They landed in Italy in September 1943 with the 1st Airborne Division. In their heavily-armed Jeeps, they roamed the countryside gathering information, raiding fuel dumps and shooting up convoys. The second-in-command of the force described Trooper O'Leary and his lifelong friend, Dennis Hodgson, as an inseparable pair of rogues who would go anywhere and do anything provided they were together; they had no fear of death and were first-class men in a scrap, but always in trouble at the base.​
​
In early 1945 PPA was operating in marshy country along the Adriatic coast of the Eighth Army sector. From intelligence provided by local partisans, it was discovered that some Germans were billeted in a coastguard station, and Captain John Campbell selected a fighting patrol which included O'Leary.​
​
They slept in a fisherman's house until 3am and then crept out and concealed themselves in the pigsty of a farmhouse close to the station. Peering through a hole in their hideout, they could make out the figure of a sentry marching up and down.​
​
At daybreak, when the sentry went inside, the patrol split into two parties and sneaked in. O'Leary kicked a door open. The room was full of Germans, all asleep apart from the sentry. While he covered the man with his Tommy-gun, his party quietly collected all the weapons before rousing the Germans, lining them up outside and marching them off. During the day, another section arrived to relieve the one that had been captured. They too were put in the bag. Almost 60 prisoners were taken without a shot being fired.​
​
O'Leary was promoted to sergeant and served with 'S' Patrol until PPA's disbandment in Austria in September 1945. He was demobilised in 1947 and returned to his work as a tiler. He played soccer for Upminster Athletic in the Athenian League and then took up golf. He worked in a holiday camp in Jersey for 10 years and had a variety of other jobs, including driving taxis and working on a trawler.​
​
Bill O'Leary, who died on December 16, was a stalwart member of the Ilford branch of the Parachute Regiment Association and an active supporter of 'Friends of PPA'. He married, in 1977, Katy Gordon. The marriage was dissolved and there were no children.​
​
IMAGES:​ 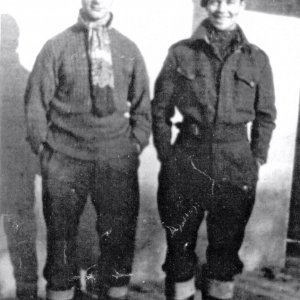 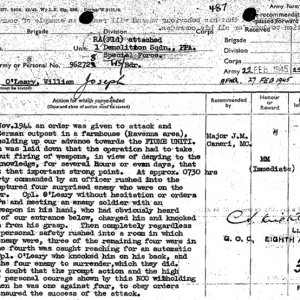 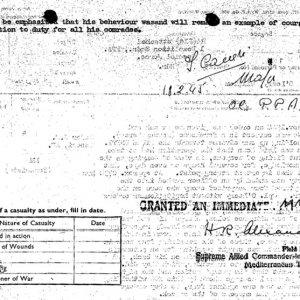