A Talent For Adventure
By Andrew Croft 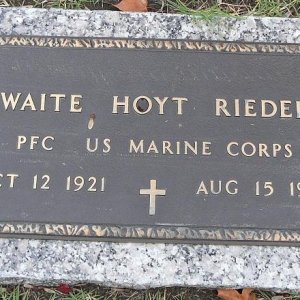 Silver Star : The President of the United States of America takes pleasure in presenting the Silver Star to Private First Class Waite H. Rieder (MCSN: 402583), United States Marine Corps Reserve, for conspicuous gallantry and intrepidity in action as a member of an artillery forward observation party serving with the First Marine Parachute Battalion in combat against enemy Japanese forces in the Empress Augusta Bay Area, Bougainville, Solomon Islands, on 29 November 1943. Despite heavy enemy mortar, machine-gun and sniper fire, Private First Class Rieder assisted in establishing and maintaining radio communications with the artillery which was attacking a Japanese-held position. Although emplaced near the hostile line of fire and lacking protection of any kind, he valiantly remained at his post for a period of seven hours in order to direct friendly artillery fire against the enemy and cover the withdrawal of the battalion. Private First Class Rieder's extreme courage and unswerving devotion to duty in the face of grave danger were in keeping with the highest traditions of the United States Naval Service.