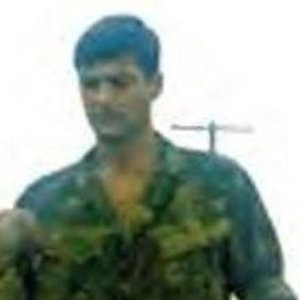 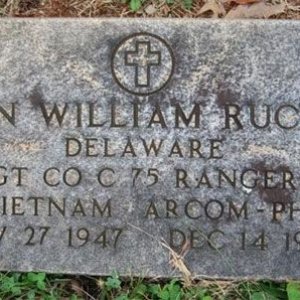 Distinguished Service Cross : The President of the United States of America, authorized by Act of Congress, July 9, 1918 (amended by act of July 25, 1963), takes pride in presenting the Distinguished Service Cross (Posthumously) to Sergeant John William Rucker (ASN: US-222302703), United States Army, for extraordinary heroism in connection with military operations involving conflict with an armed hostile force in the Republic of Vietnam, while serving with Company C (Ranger), 75th Infantry Regiment (Airborne), 17th Aviation Group, 1st Aviation Brigade. Sergeant Rucker distinguished himself by exceptionally valorous actions on 14 December 1970, while serving as assistant team leader to a six-man patrol during ground operations near Tuy Hoa, Republic of Vietnam. As the small unit advanced along a narrow trail, the lead man observed a large enemy force moving toward the friendly element along the path. Immediately, the American patrol hastened into an ambush position paralleling the enemy avenue of approach. Although vastly outnumbered, Sergeant Rucker and another team member initiated contact with the foe as they unleashed a barrage of claymore anti-personnel mines and automatic weapons fire. Utilizing the element of surprise, Sergeant Rucker's stratagem resulted in the elimination of approximately ten belligerents. The foe reacted to the initial onslaught with fragmentation grenades and automatic weapons fire while attempting to maneuver into position surrounding Sergeant Rucker's team. Realizing the peril caused by the threat of encirclement, Sergeant Rucker exposed himself to the hail of enemy rounds as he fought to prevent the foe from flanking and trapping his men, Suddenly, Sergeant Rucker was knocked to the ground by a flurry of bullets. Although painfully wounded, the sergeant refused medical assistance and continued his mission of resistance. Numerous enemy troops attempted to overrun the friendly perimeter, but Sergeant Rucker challenged the charge with accurate bursts from his M-16 rifle. Refusing to relinquish his position in the face of the enemy counter-attack, the tenacious Sergeant Rucker held his ground until his injuries weakened him and caused him to fall unconscious. Moments later, American medical helicopters and gunships arrived at the scene to evacuate the beleaguered troops. Sergeant Rucker succumbed to his wounds en route to the base hospital. Sergeant Rucker's extraordinary heroism and devotion to duty, at the cost of his life, were in keeping with the highest traditions of the military service and reflect great credit upon himself, his unit, and the United States Army.
Last edited by a moderator: Dec 13, 2021

Blood on the Risers: An Airborne Soldier's Thirty-Five Months in Vietnam
By John Leppelman