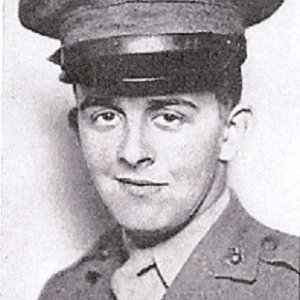 Navy Cross : The President of the United States of America takes pride in presenting the Navy Cross (Posthumously) to Corporal Edward J. Ruiz (MCSN: 419967), United States Marine Corps, for extraordinary heroism and devotion to duty while serving as Forward Observer for the 81-mm. mortar platoon of Headquarters Company, Second Battalion, Fourth Marines, SIXTH Marine Division, during action against enemy Japanese forces on Okinawa, Ryukyu Islands, 20 and 21 May 1945. Sensing the imminence of an enemy counterattack when hostile artillery and knee-mortar fire from the reverse slope of a hill blasted with increasing tempo on the battalion's lines in defiladed defensive positions, Corporal Ruiz seized the field telephone connected to the gun battery and voluntarily crawled from his foxhole twenty-five yards forward to the crest of the hill. Guided by the light of flares, he called down mortar fire on hostile troops which could be spotted moving toward his unit's position. Mortally wounded by a Japanese mortar shell, he stoically disregarded his own pain and the added peril from mortar fire and hand grenades falling on all sides and, refusing evacuation, continued to direct the fire of his gun battery. Consenting to evacuation only after the counterattack had been completely repulsed with many of the Japanese having reached positions ten yards away before being killed, Corporal Ruiz, by his fortitude, valiant fighting spirit and courageous determination, had prevented the enemy from taking a heavy toll of casualties among his comrades. His unwavering devotion to duty throughout this extremely hazardous action reflects the highest credit upon Corporal Ruiz and the United States Naval Service. He gallantly gave his life for his country.