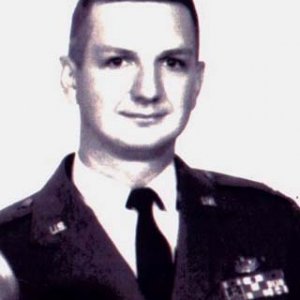 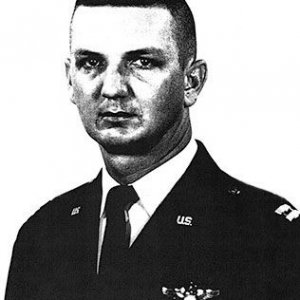 Air Force Cross : The President of the United States of America, authorized by Title 10, Section 8742, United States Code, takes pride in presenting the Air Force Cross (Posthumously) to Major Jerry Alan Sellers (AFSN: 0-81191), United States Air Force, for extraordinary heroism in military operations against an opposing armed force as a Forward Air Controller and O-2 Pilot of the 20th Tactical Air support Squadron, DaNang Air Base, Vietnam, in action near Con Thien, Republic of Vietnam, on 25 December 1967. On that date, Major Sellers, while flying a night reconnaissance mission, received a call for assistance from a United States ground patrol. This patrol had been attacked by a superior hostile force and was in imminent danger of being overrun. Weather and terrain conditions made target acquisition virtually impossible. Major Sellers elected to turn on his lights to locate the target and his aircraft was immediately bracketed by anti-aircraft fire. He then attempted to direct an AC-47 gunship to the area from which fire had been received but the pilot could not see the target. Without hesitation and with complete disregard for his own safety, Major Sellers illuminated the target with his landing lights and directed accurate fire into the hostile positions. His aircraft was struck by hostile fire and crashed. By deliberately exposing himself to the hostile fire, Major Sellers enabled the patrol to be withdrawn, ultimately saving their lives by the sacrifice of his own. Through his extraordinary heroism, superb airmanship, and aggressiveness in the face of hostile forces, Major Sellers reflected the highest credit upon himself and the United States Air Force.
Last edited by a moderator: Aug 31, 2021