A Very English Hero: The Making of Frank Thompson
By Peter J. Conradi

Staff member
Shirvington​
David​
CDT 3 (RAN)​
Lieutenant Commander​
​
Bronze Star (US)​
Afghanistan 2013​
Lieutenant Commander Shirvington was born in Brisbane, QLD and joined the Royal Australian Navy as a Seaman Officer in 2000. Serving for a brief period on HMAS Newcastle, Midshipman Shirvington then attended and graduated from the Australian Defence Force Academy with a Science Degree in Oceanography and Management. Following promotion to Sub-Lieutenant, he served on HMA Ships Townsville and Adelaide culminating in the award of his Bridge Warfare Certificate in 2005. ​
After a short posting as a watch keeper in Maritime Headquarters, Lieutenant Shirvington undertook training to specialise as a Mine Warfare and Clearance Diving Officer (MCDO), being awarded Dux of his course in 2007.​
As a qualified MCDO, his first posting was as the Diving Officer on HMAS Gascoyne, enjoying deployments to South East Asia and participating in the Five Power Defence Arrangement exercises with the United Kingdom, Singapore, Malaysia and New Zealand Defence Forces.​
Lieutenant Shirvington then joined Australian Clearance Diving Team One (AUSCDT 1) as the Operations and Maritime Tactical Operations (MTO) element officer. This culminated in the attachment to 5th Battalion Royal Australian Regiment (RAR) and deployment to Uruzgan Province, Afghanistan on Operation Slipper as an Explosive Ordnance Technician, rendering safe Improvised Explosive Devices (IEDs) and participating in combat operations with Combat Team Charlie.​
On return to Australia he was appointed as Executive Officer HMAS Diamantina and participated in the clearance of Darwin Harbour of live WW2 ordnance that were obstructing the build of the Ichthys LNG Pipeline in 2011.​
Achieving promotion to Lieutenant Commander in 2013, he was then redeployed to Kabul, Afghanistan as the Chief of IED Exploitation in the International Security Assistance Force Joint Command (ISAF JC). This deployment saw him mentoring the Afghanistan National Security Force in post blast IED analysis and conducting post blast IED assessment for Coalition Forces within Regional Command Central. For placing himself in harms way and protecting a highly classified United States program, he was awarded the United States Bronze Star.​
Selected for Command in June 2014, Lieutenant Commander Shirvington assumed command of the Armidale Class Patrol Boat crew Attack 2 in June 2015 which subsequently transitioned to Commanding Officer of HMAS Bathurst in August 2015.​
Achieving a Masters Degree in Project Management in 2014 from the University of New South Wales, David is married to his wife Tamara and enjoys following the perennially unlucky Cronulla Sharks in the NRL. Other hobbies include reading widely, cricket and acoustic guitar.​ 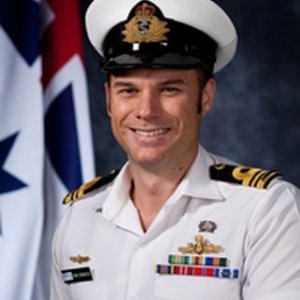 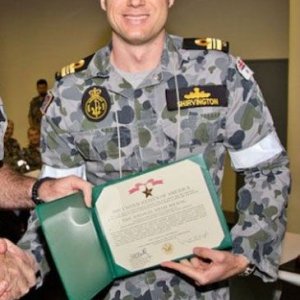