Hunters & Shooters: An Oral History of the U.S. Navy SEALs in Vietnam
By Bill Fawcett 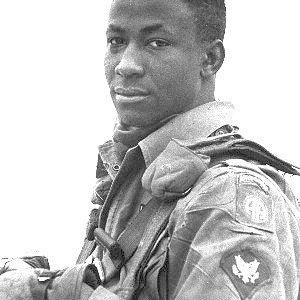 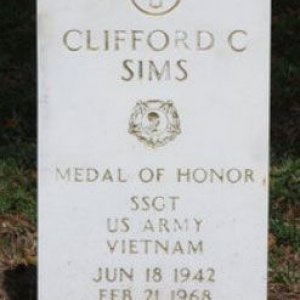 Medal Of Honor : The President of the United States of America, in the name of Congress, takes pride in presenting the Medal of Honor (Posthumously) to Staff Sergeant Clifford Chester Sims (ASN: 14780953), United States Army, for conspicuous gallantry and intrepidity at the risk of his life above and beyond the call of duty while serving as a squad leader with Company D, 2d Battalion (Airborne), 501st Infantry Regiment, 101st Airborne Division, in action against enemy aggressor forces at Hue, Republic of Vietnam, on 21 February 1968. Company D was assaulting a heavily fortified enemy position concealed within a dense wooded area when it encountered strong enemy defensive fire. Once within the wood line, Staff Sergeant Sims led his squad in a furious attack against an enemy force which had pinned down the 1st Platoon and threatened to overrun it. His skillful leadership provided the platoon with freedom of movement and enabled it to regain the initiative. Staff Sergeant Sims was then ordered to move his squad to a position where he could provide covering fire for the company command group and to link up with the 3d Platoon, which was under heavy enemy pressure. After moving no more than 30 meters Staff Sergeant Sims noticed that a brick structure in which ammunition was stocked was on fire. Realizing the danger, Staff Sergeant Sims took immediate action to move his squad from this position. Though in the process of leaving the area two members of his squad were injured by the subsequent explosion of the ammunition, Staff Sergeant Sims' prompt actions undoubtedly prevented more serious casualties from occurring. While continuing through the dense woods amidst heavy enemy fire, Staff Sergeant Sims and his squad were approaching a bunker when they heard the unmistakable noise of a concealed booby trap being triggered immediately to their front. Staff Sergeant Sims warned his comrades of the danger and unhesitatingly hurled himself upon the device as it exploded, taking the full impact of the blast. In so protecting his fellow soldiers, he willingly sacrificed his life. Staff Sergeant Sims' extraordinary heroism at the cost of his life is in keeping with the highest traditions of the military service and reflects great credit upon himself and the United States Army.
Last edited by a moderator: Jul 2, 2021
Share:
Facebook Twitter Reddit Pinterest Tumblr WhatsApp Email Share Link
Top