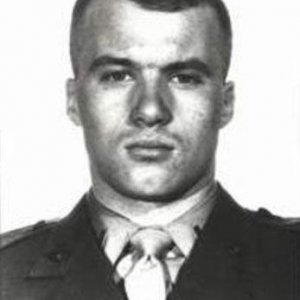 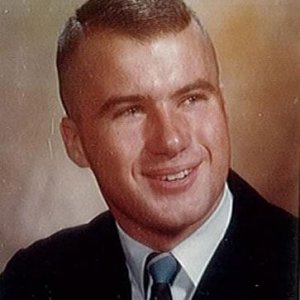 Navy Cross : The President of the United States of America takes pride in presenting the Navy Cross (Posthumously) to Second Lieutenant David William Skibbe (MCSN: 0-108861), United States Marine Corps Reserve, for extraordinary heroism while serving as a Platoon Commander with Company C, First Reconnaissance Battalion, FIRST Marine Division (Reinforced), Fleet Marine Force, in connection with combat operations against the enemy in the Republic of Vietnam. On 2 March 1970, while Second Lieutenant Skibbe was leading a patrol deep in enemy-controlled territory, the team came under a heavy volume of fire from a large hostile force. During the initial moments of the engagement, Second Lieutenant Skibbe observed a wounded man fall in a forward position, and unhesitatingly placed himself between the casualty and enemy soldiers to deliver intense covering fire which forced the enemy momentarily to break contact and enabled the Marines to move the wounded man to a more secure location. While the radio operator was requesting fixed-wing air support, the enemy launched a ground assault in an attempt to overrun the Marine position. Despite the hostile rounds impacting around him, Second Lieutenant Skibbe exposed himself to the enemy fire to direct the defensive activities of his men and, while thus engaged, was severely wounded in the ankle. Although suffering intense pain and unable to walk, he nevertheless skillfully directed the bombing and strafing runs of supporting aircraft with such accuracy that the hostile soldiers broke contact and retreated, thereby enabling a medical evacuation helicopter to come to a safe hover overhead. As Second Lieutenant Skibbe was being hoisted toward the aircraft, the hoist apparatus sustained a malfunction, and he was mortally injured when he fell to the ground. His heroic and determined actions throughout this mission contributed significantly to the defeat of the numerically superior enemy force. By his courage, valiant leadership, and unwavering devotion to duty in the face of grave personal danger, Second Lieutenant Skibbe upheld the highest traditions of the Marine Corps and of the United States Naval Service. He gallantly gave his life in the service of his country.
Last edited by a moderator: May 5, 2021