Drums of Memory: The Autobiography of Sir Stephen Hastings MC
By Stephens Hastings 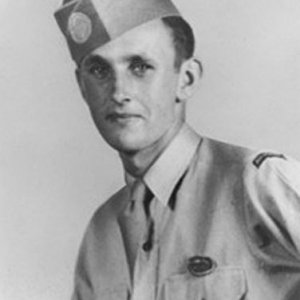 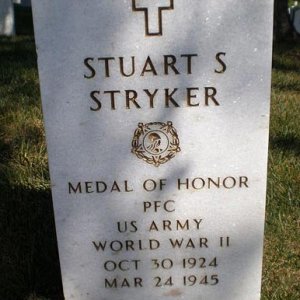 Medal of Honor : The President of the United States of America, in the name of Congress, takes pride in presenting the Medal of Honor (Posthumously) to Private First Class Stuart S. Stryker, United States Army, for conspicuous gallantry and intrepidity in action above and beyond the call of duty on 24 March 1945, while serving with Company E, 513th Parachute Infantry Regiment, 17th Airborne Division. Private First Class Stryker was a platoon runner, when the unit assembled near Wesel, Germany after a descent east of the Rhine. Attacking along a railroad, Company E reached a point about 250 yards from a large building used as an enemy headquarters and manned by a powerful force of Germans with rifles, machineguns, and four field pieces. One platoon made a frontal assault but was pinned down by intense fire from the house after advancing only 50 yards. So badly stricken that it could not return the raking fire, the platoon was at the mercy of German machine gunners when Private First Class Stryker voluntarily left a place of comparative safety, and, armed with a carbine, ran to the head of the unit. In full view of the enemy and under constant fire, he exhorted the men to get to their feet and follow him. Inspired by his fearlessness, they rushed after him in a desperate charge through an increased hail of bullets. Twenty-five yards from the objective the heroic soldier was killed by the enemy fusillades. His gallant and wholly voluntary action in the face of overwhelming firepower, however, so encouraged his comrades and diverted the enemy's attention that other elements of the company were able to surround the house, capturing more than 200 hostile soldiers and much equipment, besides freeing three members of an American bomber crew held prisoner there. The intrepidity and unhesitating self-sacrifice of Private First Class Stryker were in keeping with the highest traditions of the military service.