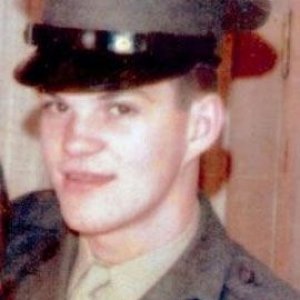 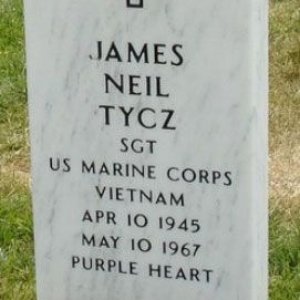 Navy Cross : The President of the United States of America takes pride in presenting the Navy Cross (Posthumously) to Sergeant James Neil Tycz (MCSN: 2082767), United States Marine Corps, for extraordinary heroism while serving with the First Platoon, Company A, Third Reconnaissance Battalion, THIRD Marine Division (Reinforced), Fleet Marine Force, near Khe Sanh in the Republic of Vietnam on 9 May 1967. Sergeant Tycz was the patrol leader of a seven-man reconnaissance patrol deep in enemy-controlled territory. Shortly after midnight a North Vietnamese Army unit, estimated to be about 30-50 men, was heard moving toward the patrol's position. Sergeant Tycz cautioned his men to remain silent so as not to be detected; however, several of the enemy troops walked into the patrol's position and started to unsling their weapons after sighting the patrol. One of the Marines quickly took two of the enemy under fire, killing them instantly. Alerted to their location, the enemy immediately began delivering a heavy volume of small-arms fire into the patrol's perimeter. One patrol member was killed instantly and another was wounded. Sergeant Tycz quickly deployed the remainder of his patrol and fearlessly moved among his men directing their fire and shouting words of encouragement despite the heavy volume of enemy fire being poured into his perimeter. Within a few minutes the assistant patrol leader was seriously wounded, as was the Corpsman attached to the patrol and the second radio operator. Sergeant Tycz moved to a radio and began calling in artillery fire on the enemy positions. When an armed enemy hand grenade landed near one of the seriously wounded Marines, Sergeant Tycz courageously and with complete disregard for his own personal safety moved forward, picked up the grenade and attempted to throw it back at the enemy. The grenade exploded after traveling only a short distance, and he fell, critically wounded. Throughout the encounter, Sergeant Tycz set an example of calmness and coolness under fire that was an inspiration to the remainder of his patrol. By his unselfish act of courage, he risked his life to save his comrades from injury and possible loss of life and thereby upheld the highest traditions of the Marine Corps and the United States Naval Service.
Last edited by a moderator: May 5, 2021