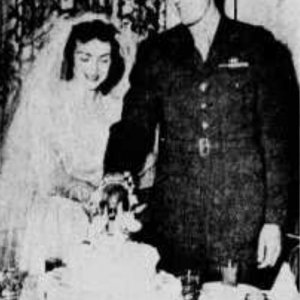 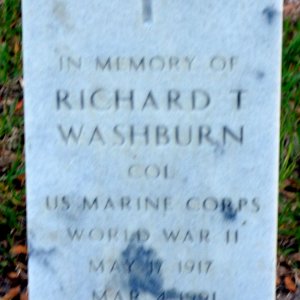 Silver Star : The President of the United States of America takes pleasure in presenting the Silver Star to Captain Richard T. Washburn (MCSN: 0-6335), United States Marine Corps Reserve, for conspicuous gallantry and intrepidity in action while serving as Commanding Officer of Company E, Second Marine Raider Battalion during operations against enemy Japanese forces on Guadalcanal, Solomon Islands between 4 November and 4 December 1942. On 11 November, while leading his company to the assistance of Company C, which was already heavily engaged, Captain Washburn encountered a numerically superior Japanese force crossing the Metapona River. With utter disregard for his own personal safety he unhesitatingly attacked the enemy inflicting heavy losses; he was finally forced to withdraw in the face of overwhelming machine gun, mortar and 20-mm. fire. Quickly reorganizing his company in the jungle, he dauntlessly led his men in a second attack against the enemy. His keen judgment and outstanding courage saved the lives of many in this engagement who otherwise might have perished. During subsequent operations his daring and skillful leadership and fearless devotion to duty were an inspiration to both officers and men throughout the battalion and were in keeping with the highest traditions of the United States Naval Service.

Silver Star : (Gold Star) The President of the United States of America takes pleasure in presenting a Gold Star in lieu of a Second Award of the Silver Star to Major Richard T. Washburn (MCSN: 0-6335), United States Marine Corps Reserve, for conspicuous gallantry and intrepidity as Commanding Officer of the Second Marine Raider Battalion in action against enemy Japanese forces at Empress Augusta Bay, Bougainville, Solomon Islands on 1 and 8 November 1943. When his commanding officer was mortally wounded during the landing operations, Major Washburn immediately assumed command and heroically led the battalion in the successful accomplishment of its mission. With inspiring and daring initiative he later guided his command in a vigorous assault against the enemy enabling his men to repel three frontal attacks and annihilate over two hundred and fifty of the hostile forces. Major Washburn's superb leadership and valiant fighting spirit throughout this vital mission were in keeping with the highest traditions of the United States Naval Service.