The Frogmen of Burma - The Story of The Sea Reconnaissance Unit
By Bruce S. Wright 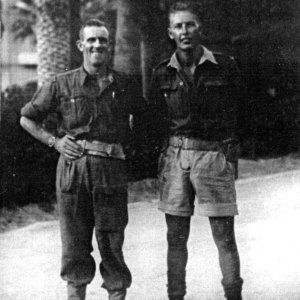 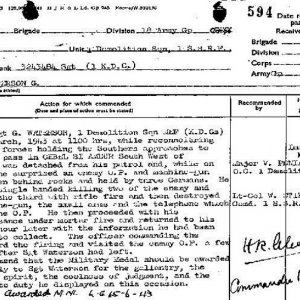 Military Medal : 3243484 Sgt G. WATERSON, 1 Demolition Sqn MEF (K.D.Gs) on 28th March, 1943 at 1100 hrs, while reconnoitring the enemy forces holding the Southern approaches to EL HAMMAM pass in GEBEL SI AMEUR South West of MAKNASSY, was detached from his patrol and while on his own, he surprised an enemy O.P. and machine-gun post hidden behind rocks and held by three Germans. He attacked single handed killing two of the enemy and wounding the third with rifle fire and then destroyed the machine gun, the small arms and the telephone which were in the O.P. He then proceeded with his reconnaissance under mortar fire and returned to his lines an hour later with the information he had been sent out to collect. The officer commanding the patrol heard the firing and visited the enemy O.P. a few minutes after Sgt Waterson had left.

I recommend that the Military Medal should be awarded immediately for the gallantry, the offensive spirit, the coolness of judgement and the devotion to duty he displayed on this occasion.