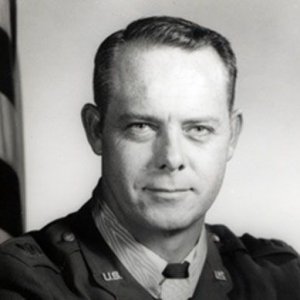 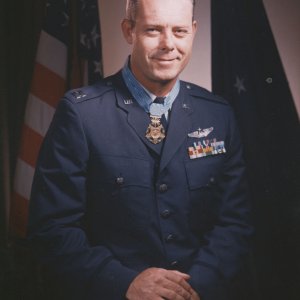 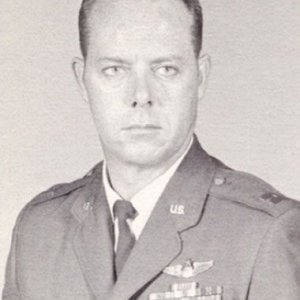 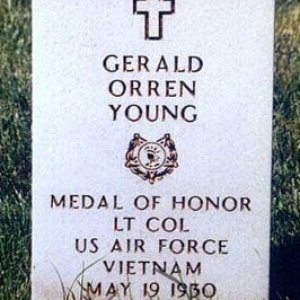 Medal Of Honour : The President of the United States of America, in the name of Congress, takes pleasure in presenting the Medal of Honor to Captain Gerald Orren Young, United States Air Force, for conspicuous gallantry and intrepidity at the risk of his life above and beyond the call of duty. Captain Young distinguished himself while serving as a helicopter rescue crew commander with the 37th Aerospace Rescue and Recovery Squadron, in action near Khe Sanh, Republic of Vietnam, on 9 November 1967. Captain Young was flying escort for another helicopter attempting the night rescue of an Army ground reconnaissance team in imminent danger of death or capture. Previous attempts had resulted in the loss of two helicopters to hostile ground fire. The endangered team was positioned on the side of a steep slope which required unusual airmanship on the part of Captain Young to effect pickup. Heavy automatic weapons fire from the surrounding enemy severely damaged one rescue helicopter, but it was able to extract three of the team. The commander of this aircraft recommended to Captain Young that further rescue attempts be abandoned because it was not possible to suppress the concentrated fire from enemy automatic weapons. With full knowledge of the danger involved, and the fact that supporting helicopter gunships were low on fuel and ordnance, Captain Young hovered under intense fire until the remaining survivors were aboard. As he maneuvered the aircraft for takeoff, the enemy appeared at point-blank range and raked the aircraft with automatic weapons fire. The aircraft crashed, inverted, and burst into flames. Captain Young escaped through a window of the burning aircraft. Disregarding serious burns, Captain Young aided one of the wounded men and attempted to lead the hostile forces away from his position. Later, despite intense pain from his burns, he declined to accept rescue because he had observed hostile forces setting up automatic weapons positions to entrap any rescue aircraft. For more than 17 hours he evaded the enemy until rescue aircraft could be brought into the area. Through his extraordinary heroism, aggressiveness, and concern for his fellow man, Captain Young reflected the highest credit upon himself, the U.S. Air Force, and the Armed Forces of his country.

The Son Tay Raid: American POWs in Vietnam Were Not Forgotten
By John Gargus