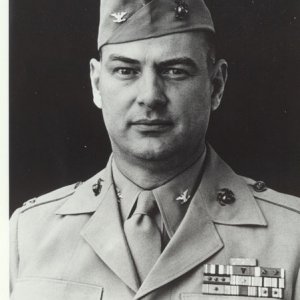 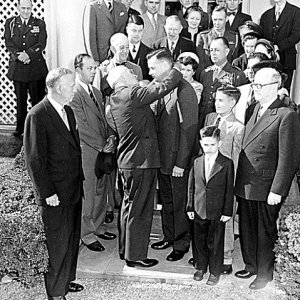 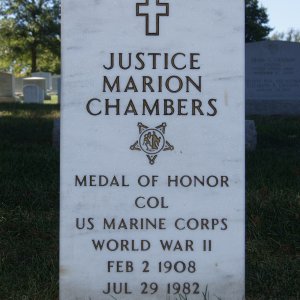 Medal Of Honor : The President of the United States of America, in the name of Congress, takes pleasure in presenting the Medal of Honor to Colonel [then Lieutenant Colonel] Justice Marion Chambers (MCSN: 0-4796), United States Marine Corps Reserve, for conspicuous gallantry and intrepidity at the risk of his life above and beyond the call of duty as Commanding Officer of the Third Assault Battalion Landing Team, Twenty-Fifth Marines, FOURTH Marine Division, in action against enemy Japanese forces on Iwo Jima, Volcano Islands, from 19 to 22 February 1945. Under a furious barrage of enemy machinegun and small-arms fire from the commanding cliffs on the right, Colonel Chambers landed immediately after the initial assault waves of his battalion on D-day to find the momentum of the assault threatened by heavy casualties from withering Japanese artillery, mortar rocket, machinegun, and rifle fire. Exposed to relentless hostile fire, he coolly reorganized his battle-weary men, inspiring them to heroic efforts by his own valor and leading them in an attack on the critical, impregnable high ground from which the enemy was pouring an increasing volume of fire directly onto troops ashore as well as amphibious craft in succeeding waves. Constantly in the front lines encouraging his men to push forward against the enemy's savage resistance, Colonel Chambers led the eight-hour battle to carry the flanking ridge top and reduce the enemy's fields of aimed fire, thus protecting the vital foothold gained. In constant defiance of hostile fire while reconnoitering the entire regimental combat team zone of action, he maintained contact with adjacent units and forwarded vital information to the regimental commander. His zealous fighting spirit undiminished despite terrific casualties and the loss of most of his key officers, he again reorganized his troops for renewed attack against the enemy's main line of resistance and was directing the fire of the rocket platoon when he fell, critically wounded. Evacuated under heavy Japanese fire, Colonel Chambers, by forceful leadership, courage, and fortitude in the face of staggering odds, was directly instrumental in insuring the success of subsequent operations of the 5th Amphibious Corps on Iwo Jima, thereby sustaining and enhancing the finest traditions of the U.S. Naval Service.

Silver Star : The President of the United States of America takes pleasure in presenting the Silver Star to Major Justice Marion Chambers (MCSN: 0-4796), United States Marine Corps Reserve, for conspicuous gallantry and intrepidity in action while attached to the First Marine Raider Battalion during the seizure of Tulagi, Solomon Islands, from enemy Japanese forces, on the night of August 7-8, 1942. While a patient at the Battalion Aid Station, suffering from multiple wounds inflected by a mortar shell, Major Chambers personally assumed control of the evacuation of the wounded when a hostile counterattack threatened to penetrate to the station. With utter disregard for his own personal safety, he also directed the action of the Marine detachment covering the removal of the wounded to a less dangerous area. His heroic devotion to duty was in keeping with the highest traditions of the United States Naval Service.