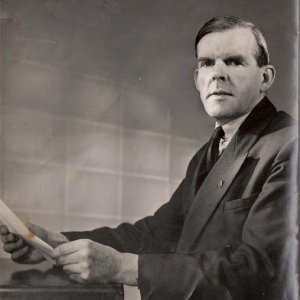 Order of The British Empire : Lt-Col Collins has held the appointment of CSO 1 SAS at this HQ since its inception, throught the period of build-up of the SAS force in UK and its participation in the battles of NORMANDY, BRITTANY and the ARDENNES, to the final brilliantly successful fights of the SAS Regiments in the RHINE Provinces and NE HOLLAND in the Spring of 1945.

To ensure the smooth working of the organization, to complete planning details, and to act as a liaison officer during SAS operations, Lt-Col Collins has been attached to British, Canadian and American formations in NW EUROPE for considerable periods.

In April 1945 he was attached to 1st Canadian Army in HOLLAND for liaison duties during the operations when SAS troops fought under that Army for the first time in NW EUROPE.

Lt-Col Collins' selfless devotion to duty has been an inspiration to his men and an example to all.


Croix De Guerre (Belgium ) : As staff officer SAS at HQ 1 British Airborne Corps since the inception of the SAS Bde, Lt-Col COLLINS has played an outstanding part in the initial organisation planning and operations of all SAS Units. He was responsible for much of the detailed work of arranging the transfer of 1 Belgian Independent Parachute Company to SAS and took a prominent part in their reorganisation for their new role. Since the commencement of operations much of the outstanding success achieved by the Belgian SAS Regt has been the result of the initial planning carried out by Lt-Col COLLINS with unsparing energy and devotion to duty.

Hi John, Thanks for the info on Uncle Ian. Additional Information - First Scotsman to get to a Grand Slam tennis final - Wimbledon x 2, & Australian. (Andy Murray was the second).
regards