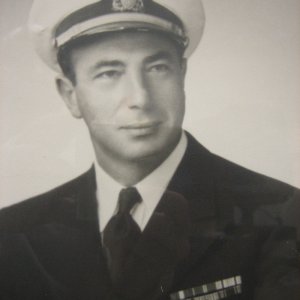 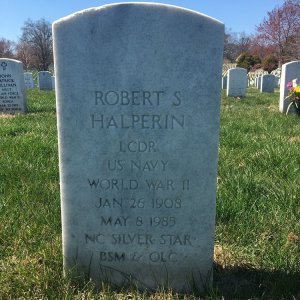 Navy Cross : The President of the United States of America takes pride in presenting the Navy Cross (Posthumously) to Chief Specialist Robert Halperin, United States Navy, for extraordinary heroism and devotion to duty while in charge of a Scout Boat from the Northern Attack Group during the assault on and occupation of French Morocco from 8 to 11 November 1942. Preceding the assault on Mehdia on 8 November, Chief Specialist Halperin skillfully maneuvered his boat in complete darkness from the transport area seven miles off the coast into a position to locate and mark landing beaches on the hostile shore. Landing an Army scout party at the prescribed beach, he then, at great risk of his life and despite the strafing of enemy planes, steadfastly maintained a position off shore and guided incoming waves of assault troops to their proper destination. When all had landed, he assisted the shore party in locating points of egress from the beach and connecting roads inland, and personally captured two enemy officers. His conduct throughout was in keeping with the highest traditions of the Navy of the United States.

Silver Star : For conspicuous gallantry and intrepidity as Comanding Officer of United States Naval Unit SIX, during action against enemy Japanese forces in Southern Fukien Province, China, from June 29 to July 21, 1945. Operating with insufficient and inferior equipment, Lieutenant Commander Halperin repeatedly led his American and Chinese guerillas in attacks against strong hostile forces, setting ambushes and waging open battle to inflict extensive damage on the enemy and account for overwhelming numbers of Japanese dead. By his forceful leadership, indomitable fighting spirit and aggressive determination, maintained in the face of tremendous odds, Lieutenant Commander Halperin served as an inspiration to all Allied officers and men under his command and contributed materially to the success of our operations in this area. His heroic conduct and courageous devotion to duty throughout reflect the highest credit upon himself and the United States Naval Service.

Bronze Star : For meritorious achievement as Commanding officer of United States Naval Unit SIX, attached to United States Naval Group, China, from February 1 to September 1, 1945. Through his unusual tact and ability in dealing with the Chinese and his competent organization of the men under his command, Lieutenant Commander Halperin was responsible for securing invaluable intelligence information and weather forecasts; for providing effective patrols along the coast of Fukien Province; and for the rescue of sixteen American flyers who had been shot down by the enemy in this area. Though directing the operations of his unit at the end of the world's longest supply line and behind enemy lines, he skillfully trained twenty-five hundred Chinese guerrillas and planned and executed vigorous assaults against Japanese forces which resulted in the destruction of hundreds of hostile troops and many tons of enemy shipping, thereby fulfilling American commitments in his area. His zealous energy, inspiring leadership and conscientious and unwavering devotion to duty were contributing factors in the success of the United States Naval Group in China and reflect the highest credit upon Lieutenant Commander Halperin and the United States Naval Service.

Bronze Star : For meritorious performance of duty while attached to the staff of Commander Assault Force "U". This Naval Assault Force successfully landed the Seventh Corps, United States Army on the Cherbourg Peninsula of France against well prepared defenses and strong opposition.

Lieutenant Halperin performed exceptionally meritorious service in assisting, in guiding the first two boat waves from the transport area to the line of departure and thence to the assigned Assault Beaches. His cool judgment and unusual ability contributed materially to the successful landing of the first waves in a position from which the troops reached their objectives with a minimum of casualties. Under the direction of Lieutenant Halperin, troops were rescued from swamped boats and despatched to the beaches, and two men were saved from drowning by his exceptional initiative and quick action.

His conduct was at all times in accordance with the best traditions of the United States naval service.