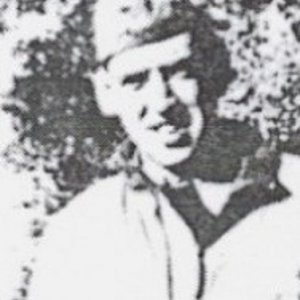 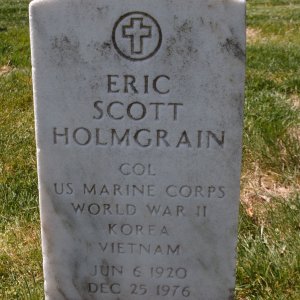 Distinguished Service Cross : The President of the United States of America, authorized by Act of Congress, July 9, 1918, takes pleasure in presenting the Distinguished Service Cross to First Lieutenant Eric S. Holmgrain, United States Marine Corps Reserve, for extraordinary heroism in connection with military operations against an armed enemy as a member of Company Q, FOURTH Marine Raider Battalion in action against the enemy Japanese forces at Viru Village, Vangunu, New Georgia, Solomon Islands, on 1 July 1943. Ignoring the dangers of exposing himself to enemy fire, Lieutenant Holmgrain went to the aid of a wounded gunnery sergeant who was lying in the direct line of enemy machine-gun fire. He not only removed the man to a position of safety but he stopped long enough during the process to wipe out the enemy machine-gun nest. The outstanding heroism and skill displayed by First Lieutenant Holmgrain on this occasion reflect highest credit upon himself and the Armed Forces of the United States.

Does anybody have any info on my cousin ? I was young when Scotty died in 1976 and remember 3 generals at his funeral. I know he was one of the first in Viet Nam retiring as a full Colonel. Some of the tidbits I vagely recall makes me think he was in special ops ? or something similar. Any information would be helpfull
Share:
Facebook Twitter Reddit Pinterest Tumblr WhatsApp Email Share Link
Top