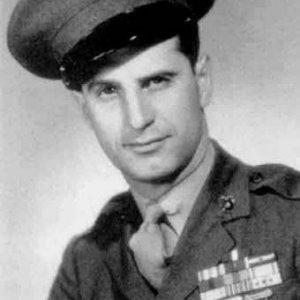 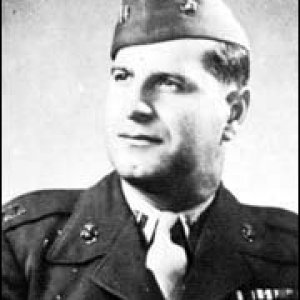 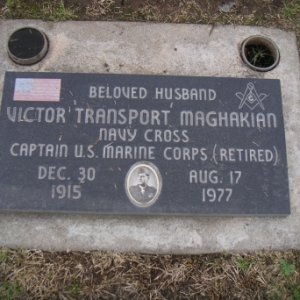 Navy Cross : The President of the United States of America takes pleasure in presenting the Navy Cross to Platoon Sergeant Victor Maghakian (MCSN: 251055), United States Marine Corps, for extraordinary heroism and conspicuous devotion to duty while serving as a Platoon Sergeant of Company A, SECOND Marine Raider Battalion, during the Marine Raider Expedition against the Japanese-held island of Makin in the Gilbert Islands on 17 and 18 August 1942. Leading his platoon with great skill and determination, Platoon Sergeant Maghakian charged the beachhead with the landing force and was the first casualty in this operation. After receiving first aid, he returned to the front and remained there, courageously leading his men until directed by the Medical Officer to return to the rear. His gallant devotion to duty and complete disregard for his own personal safety were in keeping with the highest traditions of the United States Naval Service.

Silver Star : The President of the United States of America takes pleasure in presenting the Silver Star to Platoon Sergeant Victor Maghakian (MCSN: 251055), United States Marine Corps, for conspicuous gallantry and intrepidity while serving with Company A, Second Marine Raider Battalion during operations against enemy Japanese forces on Guadalcanal, Solomon Islands, on 3 December 1942. When his platoon, acting as point, was heavily engaged with a strong enemy combat patrol at Nambula, and his platoon leader gravely wounded, Platoon Sergeant Maghakian immediately assumed command and, in the face of determined Japanese fire, led part of his platoon against a machine-gun position with marked success. Although wounded during the action, he steadfastly remained at his post until loss of blood forced his evacuation. His initiative, courage, and heroic devotion to duty were in keeping with the highest traditions of the United States Naval Service.

Silver Star (Gold Star) : The President of the United States of America takes pleasure in presenting a Gold Star in lieu of a Second Award of the Silver Star to Gunnery Sergeant Victor Maghakian (MCSN: 251055), United States Marine Corps, for conspicuous gallantry and intrepidity while serving with Reconnaissance Company, Headquarters Battalion, FOURTH Marine Division, in action against enemy Japanese forces from the beginning of the Kwajaleln Operation to the close of the Einwetok Campaign (31 January - 23 February 1944). A seasoned fighter, Gunnery Sergeant Maghakian soundly instructed his men in jungle fighting and in Japanese combat tactics, carefully maintaining the company's weapons in perfect firing order despite difficult operating conditions. Fearlessly aggressive in combat, he personally annihilated the last four Japanese on Mellu Island and, when a platoon on Rigill Island was pinned down by fire from automatic weapons, valiantly led a small detachment around the enemy flank and removed the danger at its source with a well-aimed hand grenade. His outstanding performance, keen initiative and heroic devotion to duty throughout were an inspiration to those with whom he served and reflect the highest credit upon Gunnery Sergeant Maghakian and the United States Naval Service.