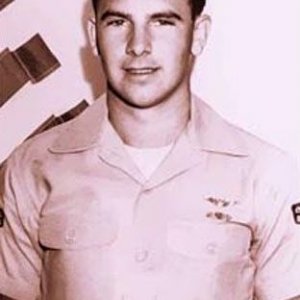 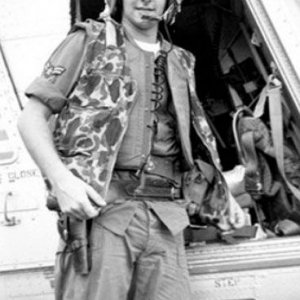 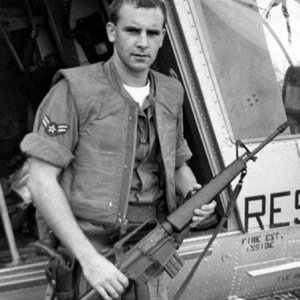 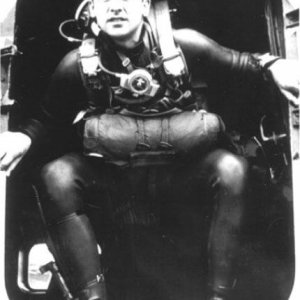 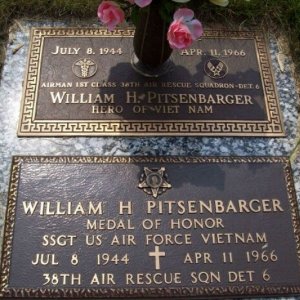 Medal Of Honor : The President of the United States of America, in the name of Congress, takes pride in presenting the Medal of Honor (Posthumously) to Airman First Class William H. Pitsenbarger (AFSN: 15680744), United States Air Force, for conspicuous gallantry and intrepidity at the risk of his life above and beyond the call of duty. Airman First Class Pitsenbarger distinguished himself by extreme valor on 11 April 1966 near Cam My, Republic of Vietnam, while assigned as a Pararescue Crew Member, Detachment 6, 38th Aerospace Rescue and Recovery Squadron. On that date, Airman Pitsenbarger was aboard a rescue helicopter responding to a call for evacuation of casualties incurred in an on-going firefight between elements of the United States Army's 1st Infantry Division and a sizable enemy force approximately 35 miles east of Saigon. With complete disregard for personal safety, Airman Pitsenbarger volunteered to ride a hoist more than one hundred feet through the jungle, to the ground. On the ground, he organized and coordinated rescue efforts, cared for the wounded, prepared casualties for evacuation, and insured that the recovery operation continued in a smooth and orderly fashion. Through his personal efforts, the evacuation of the wounded was greatly expedited. As each of the nine casualties evacuated that day were recovered, Pitsenbarger refused evacuation in order to get one more wounded soldier to safety. After several pick-ups, one of the two rescue helicopters involved in the evacuation was struck by heavy enemy ground fire and was forced to leave the scene for an emergency landing. Airman Pitsenbarger stayed behind, on the ground, to perform medical duties. Shortly thereafter, the area came under sniper and mortar fire. During a subsequent attempt to evacuate the site, American forces came under heavy assault by a large Viet Cong force. When the enemy launched the assault, the evacuation was called off and Airman Pitsenbarger took up arms with the besieged infantrymen. He courageously resisted the enemy, braving intense gunfire to gather and distribute vital ammunition to American defenders. As the battle raged on, he repeatedly exposed himself to enemy fire to care for the wounded, pull them out of the line of fire, and return fire whenever he could, during which time, he was wounded three times. Despite his wounds, he valiantly fought on, simultaneously treating as many wounded as possible. In the vicious fighting which followed, the American forces suffered 80 percent casualties as their perimeter was breached, and airman Pitsenbarger was finally fatally wounded. Airman Pitsenbarger exposed himself to almost certain death by staying on the ground, and perished while saving the lives of wounded infantrymen. His bravery and determination exemplify the highest professional standards and traditions of military service and reflect great credit upon himself, his unit, and the United States Air Force.

Airman's Medal : The President of the United States of America, authorized by Act of Congress, July 2, 1926, takes pleasure in presenting the Airman's Medal to Airman First Class William H. Pitsenbarger (AFSN: 15680744), United States Air Force, for heroism involving voluntary risk of life while assigned as a Pararescue Crew Member, Detachment 6, 38th Aerospace Rescue and Recovery Squadron, in action near Bien Hoa Air Base, Republic of Vietnam, on 7 March 1966. On that date, Airman Pitsenbarger was on duty when a helicopter was requested to remove a severely wounded Vietnamese from a burning, uncharted mine field. With complete disregard for his own safety and despite the hazard of being lowered on a concealed mine, Airman Pitsenbarger was voluntarily lowered by hoist to recover the injured man. The exemplary courage and heroism displayed by Airman Pitsenbarger have reflected great credit upon himself and the United States Air Force.