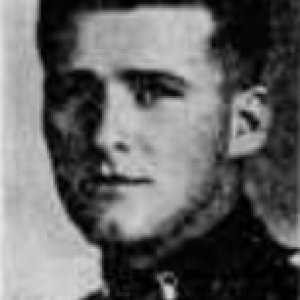 Navy Cross : The President of the United States of America takes pleasure in presenting the Navy Cross to Captain Merwyn C. Plumley (MCSN: 0-7258), United States Marine Corps, for extraordinary heroism and distinguished service as Commanding Officer of Company A, SECOND Marine Raider Battalion, during the Marine Raider Expedition against the Japanese-held island of Makin in the Gilbert Islands on 17 and 18 August 1942. With his company providing the advance guard, Captain Plumley led the assault on enemy forces, retaining the initiative in spite of heavy casualties sustained by his company, and successfully turning back two severe charges by the enemy which threatened the flank. When two leaders of his first platoon were wounded in quick succession, he personally assumed the leadership of this platoon, which held a key position, until another leader became available. The inspiring example of his leadership and his outstanding devotion to duty were in keeping with the highest traditions of the United States Naval Service.

Legion Of Merit : The President of the United States of America takes pleasure in presenting the Legion of Merit to Captain Merwyn C. Plumley (MCSN: 0-7258), United States Marine Corps, for exceptionally meritorious conduct in the performance of outstanding services to the Government of the United States while charged with commanding the Rear Echelon, Second Marine Raider Battalion, and with procuring and transporting supplies to the battalion in the field during operations against enemy Japanese forces at Guadalcanal, Solomon Islands, 4 November to 4 December 1942. Carrying on this important task with marked ingenuity and resolute purpose, Captain Plumley successfully accomplished his mission, on one occasion patrolling the beach beyond the Japanese lines in order to contact the battalion patrol, and again during operations on the Lunga River, going aloft six times in one day to drop supplies. His loyalty and courageous devotion to duty in spite of obstacles and difficulties were in keeping with the highest traditions of the United States Naval Service.