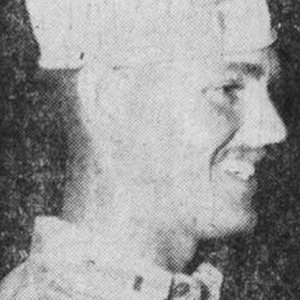 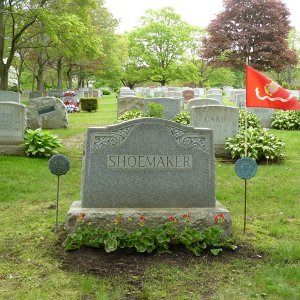 Silver Star : The President of the United States of America takes pleasure in presenting the Silver Star to First Lieutenant William G. Shoemaker (MCSN: 0-13216), United States Marine Corps Reserve, for conspicuous gallantry and intrepidity as a member of a reconnaissance patrol landed by submarine on enemy-held Shortland Island, Solomon Islands, August 23, 1943. Voluntarily and with utter disregard of personal safety, First Lieutenant Shoemaker embarked upon an extremely dangerous mission into Japanese-occupied territory for the purpose of securing vital information with regard to terrain, hydrographic conditions, and strength and disposition of hostile forces. Undeterred by the isolation of his position and by the full knowledge that no assistance could be expected from outside sources, he nevertheless remained on the island for three days, successfully carrying out an important assignment under hazardous conditions where discovery by Japanese troops would undoubtedly have resulted in his capture or death. His courageous devotion to duty was in keeping with the highest tradition of the United States Naval Service.

Navy Cross : The President of the United States of America takes pleasure in presenting the Navy Cross to First Lieutenant William G. Shoemaker (MCSN: 0-13216), United States Marine Corps Reserve, for extraordinary heroism and distinguished service while serving as Platoon Leader in a Rifle Company of the First Battalion, Twenty-First Marines, THIRD Marine Division (Reinforced), in action against enemy Japanese forces at Empress Augusta Bay, Bougainville, Solomon Islands, from 9 November 1943 to 21 December 1943. Halted at the crest of a vital enemy-held ridge by fierce hostile machine-gun fire, First Lieutenant Shoemaker courageously advanced despite wounds received previously and located the enemy emplacement, enabling his men to destroy it. Repeating his daring tactics the following day, he proceeded three times beyond his own lines, fearlessly drawing enemy sniper fire in order to disclose Japanese gun positions, and subsequently remained behind with three other men to prevent hostile interference in the withdrawal of his units clearing the way for a mortar fire assault against the enemy. On 18 December First Lieutenant Shoemaker voluntarily joined the relief unit replacing his men and personally killed a Japanese gunner at his post, later leading six flame-throwers in the destruction of several hostile machine-gun positions. Refusing evacuation although wounded again, he skillfully led the assault of a rifle platoon and captured another important enemy emplacement. First Lieutenant Shoemaker's intrepid leadership and inspiring devotion to duty were in keeping with the highest traditions of the United States Naval Service.

Navy Cross (Gold Star) : The President of the United States of America takes pride in presenting a Gold Star in lieu of a Second Award of the Navy Cross (Posthumously) to Captain William G. Shoemaker (MCSN: 0-13216), United States Marine Corps Reserve, for extraordinary heroism while serving as Commanding Officer of Company A, First Battalion, Twenty-First Marines, THIRD Marine Division, in action against enemy Japanese forces on the Asan-Adelup Beachhead, Guam, Marianas Islands, from 21 to 26 July 1944. Establishing defense for a strategic sector of the division beachhead line on 22 July, Captain Shoemaker completed the relief after dark and, subsequently guiding reserves into position at midnight, successfully repulsed a sharp counterattack with great loss to the enemy. Skillfully employing supporting mortar and artillery fire during a large-scale counterattack preceded by an intense mortar barrage against his lines on 25 July, he effectively beat back the Japanese before they reached assault range. Again the enemy attacked in full force; they penetrated our lines, intermingled with our troops and caused confusion and disorganization. Hearing the word "withdraw" passed by unknown authority, Captain Shoemaker promptly stood up under withering shellfire and commanded his men to hold fast and prevent the hostile troops from overrunning the entire beachhead. Then, depleting his front line and establishing a strong support line which refused his flank to the Japanese, he enabled his command to drive off succeeding attempts by the enemy to widen the breach, and to hold until dawn. The following morning, he directed an effective mortar barrage which destroyed the Japanese who had penetrated, annihilated weapons crews advancing through a gap in the ridge and personally led a devastating counterattack which completely restored our lines. By his forceful and inspiring leadership, great personal valor and outstanding devotion to duty in the face of overwhelming odds, Captain Shoemaker contributed immeasurably to the success of our forces in recapturing this vital Japanese stronghold and upheld the highest traditions of the United States Naval Service.