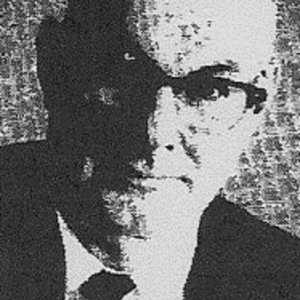 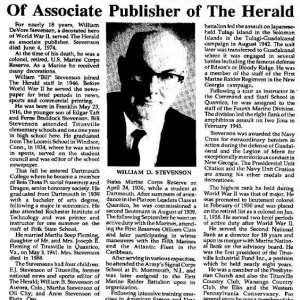 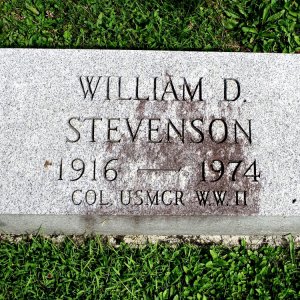 Navy Cross : The President of the United States of America takes pleasure in presenting the Navy Cross to Captain William D. Stevenson (MCSN: 0-6265), United States Marine Corps Reserve, for extraordinary heroism and distinguished service while serving as Battalion Communications Officer, Headquarters, FIRST Marine Raider Battalion, during the enemy Japanese attack on Henderson Field, Guadalcanal, Solomon Islands, on the night of 13 and 14 September 1942. Placed in command of a patrol to reconnoiter the left flank of the battalion reserve line and to determine the location of the hostile troops enveloping that flank, Captain Stevenson, in spite of severe enemy rifle and machine gun fire, completed this mission successfully. Then, directed to return to the battalion command post, he took over the battalion switchboard and, in the face of ever-present danger, operated it effectively and skillfully. With all other personnel forced to another position in the rear, and with his post entirely surrounded by infiltrating Japanese, Captain Stevenson gallantly remained, and alone, maintained communication with the division command post and with supporting artillery, until the enemy in the rear cut the wires. His unswerving devotion to duty and great personal valor were in keeping with the highest traditions of the United States Naval Service.

Legion Of Merit : The President of the United States of America takes pleasure in presenting the Legion of Merit to Major William D. Stevenson (MCSN: 0-6265), United States Marine Corps, for exceptionally meritorious conduct in the performance of outstanding services to the Government of the United States as Communications Officer with the First Marine Raider Regiment in action against enemy Japanese forces in the South Pacific Area from 1 April to 6 October 1943. With clear foresight and technical skill, Major Stevenson trained the personnel and supervised the installation of equipment of his regiment, developing an efficient, large-scale communications network with a minimum of material. Throughout periods of intense fighting, he demonstrated his ability as a leader as well as an excellent technician and devised an ingenious system for intra-regimental communication which saved many valuable hours of decoding and encoding. Major Stevenson's splendid resourcefulness and untiring devotion to duty were in keeping with the highest traditions of the United States Naval Service.