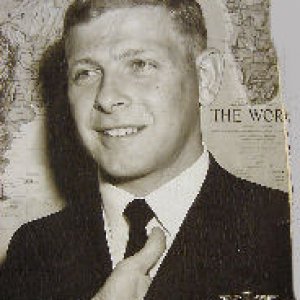 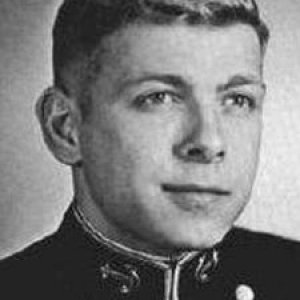 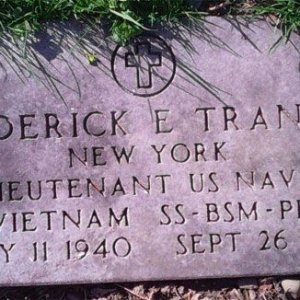 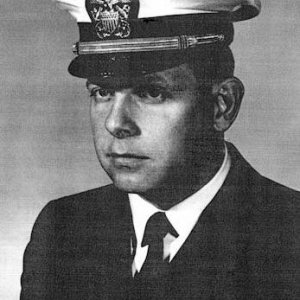 Silver Star:
The President of the United States of America takes pleasure in presenting the Silver Star to Lieutenant Frederick Eugene Trani, Jr. (NSN: 0-669618), United States Navy, for conspicuous gallantry and intrepidity in action as a member of Sea Air Land Team TWO (SEAL-2), Task Force 116, while serving with friendly foreign forces engaged in armed conflict against Communist insurgent forces on the hostile island of Cu Lao Dung, Ba Xuyen Province, Republic of Vietnam, on 26 July 1967. While leading a small combat patrol, Lieutenant Trani, serving with SEAL Team Detachment Alpha, encountered and subsequently was surrounded by a numerically superior enemy force. Unable to maneuver out of the enemy encirclement, Lieutenant Trani attempted to contact supporting helicopters by radio, but before he could effectively communicate his unit's position, he experienced radio failure. Undaunted by the lack of communications with supporting arms, he maneuvered his small unit into a tight defensive position. Though pinned down by constant enemy automatic weapons and rifle fire in a position that afforded only minimal protection for himself and his squad, and despite growing uncertainty of the arrival of assistance, Lieutenant Trani courageously moved among his men and succeeded in keeping morale high. Faced with a limited supply of ammunition and the imminent threat of a coordinated enemy attack that might easily overrun his small unit, he methodically employed every conceivable means to attract the attention of armed helicopters which he could hear operating in the distance. Four unnerving hours passed before the armed helicopters arrived to assist his beleaguered unit. Able to employ only primitive methods, he succeeded in marking his position for the helicopters and directed their fire onto part of the Viet Cong forces surrounding him. He directed another helicopter to a safe location to land for extraction of his unit. He then organized his men and maneuvered them under continuing enemy fire to the extraction craft without casualties or loss of a prisoner who later yielded valuable intelligence information. Through his exemplary and professional leadership, unwavering courage under fire and inspiring conduct throughout a desperate situation, Lieutenant Trani upheld the highest traditions of the United States Naval Service.

Legion of Merit with Combat "V":
The President of the United States of America takes pride in presenting the Legion of Merit with Combat "V" (Posthumously) to Lieutenant Frederick Eugene Trani, Jr. (NSN: 0-669618), United States Navy, for exceptionally meritorious conduct in the performance of outstanding services to the Government of the United States while serving in the Republic of Vietnam from 15 May to 26 September 1968. As the Senior Advisor to the Vietnamese Navy SEALS, Lieutenant Trani provided advice and assistance to the SEALS in all matters pertaining to their training, utilization and administration. He participated in numerous combat operations and was often subjected to direct enemy fire. Through Lieutenant Trani's keen insight and outstanding professionalism, the Vietnamese Navy SEALS were reorganized, equipped and trained to conduct unconventional warfare type missions throughout the Republic of Vietnam. Their motivation and performance during many difficult and dangerous assignments is directly attributable to Lieutenant Trani's efforts. His devotion to duty, courage under fire and sense of responsibility were in keeping with the highest traditions of the United States Naval Service. (Lieutenant Trani is authorized the Combat "V".)
Last edited by a moderator: Oct 14, 2020